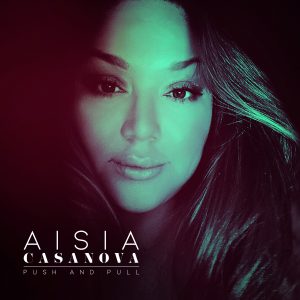 This spring, we’re introduced to a fresh face to be sprung over; Aisia Casanova is an American, Angola-based pop and R&B singer and songwriter, soon to be a darling to our sonic ears. Although originally from Texas, she has an impressive international travel background adding to her experiences prevalent in the diversity of her music. Aisia Casanova relocated to Luanda, in Angola, where she in active pursuit of her music career, co-founded a company called ooJah Productions.
She has since been collaborating with various local talent in Angola to work on her upcoming debut EP “Twin Flame Love“. Serving as a lead single towards the EP, she offers us this infectious groove, “Push and Pull“, that’s got Cupid conflicted!  In this melody fusion of Urban Jazz and House, Aisia narrates an avid but yet conflicted love story where she tangos with her emotions just as she ironically does with her lover. To let go or hold on, the instant break up and makeup, the incomplete pursuit and withdrawal, the push and pull relationship dynamic – love had become a contradictory beautiful disaster.
Stream/download “Push And Pull” here: smarturl.it/push-and-pull
Keep Up With Aisia Casanova
Facebook – Aisia Casanova
Instagram – @AisiaCasanova