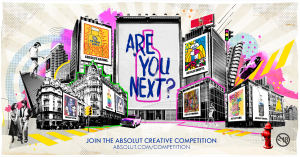 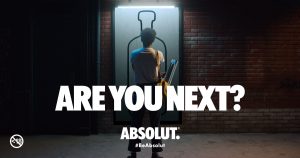 ABSOLUT SEARCHES FOR THE NEXT GLOBAL ARTISTIC COLLABORATOR
Absolut is searching for the next creative voice for the brand offering a cash prize of €20 000 and the opportunity for their work to be displayed on globally iconic sites like Piccadilly Circus and Times Square.
Could the design of a bottle serve as a muse to stir creativity?

Numerous creatives – painters, fashion designers and art directors – have been inspired by the clarity, simplicity and perfection of the shape of the Absolut bottle.  Carrying the bottle to clubs and sporting its contents as aftershave, Andy Warhol declared, “I love the bottle, I want to do something with it”. In 1986 he became the first artist to create an original work for Absolut, kick-starting an impactful campaign that led to hundreds of collaborations with contemporary artists.

Since then the Swedish company commissioned around 850 artworks (some of which were subsequently used in print ads) from leading artists including Keith Haring, Romero Britto, Rosemarie Trockel, Ed Ruscha, Damien Hirst, and Mickalene Thomas. The list of artists who have contributed to the Absolut ad campaign reads like the VIP guest list to the world’s most desirable party: Jean-Paul Gaultier, Gianni Versace, Helmut Lang, Manolo Blahnik, Herb Ritts and Annie Liebowitz.

Now Absolut is on a global mission to uncover the next Haring, Britto or Thomas, calling on artists and designers to enter the Absolut Creative Competition before 31 January 2019 and stand a chance to win a R320 000 (€20 000) cash prize and have their work displayed on  globally iconic OOH sites (outdoor advertising).

Artists and designers older than 21 are encouraged to muse on the iconic silhouette of the Absolut bottle, visualizing a concept of positive change bringing to life one of Absolut’s brand beliefs: No matter where we are from, we’re all human; everybody should be free to express themselves; and all genders are equal.

As another step in Absolut’s journey of “Taking African creativity to the world” the winner of the Absolut Creative Competition will be the next artistic collaborator whose artwork will sit alongside that of the most daring creatives of the last 40 years.

Once all entries have been submitted – the deadline is 31 January 2019 – the entries will be assessed by a panel of South African creatives. This panel will then create a shortlist of their favourites, and the local winners will be decided.

“The competition is important for us because it provides a unique opportunity to celebrate the Absolut art heritage. We’re calling on a new generation of creatives to join the long line of modern art greats we’ve worked with from Damien Hirst to Keith Haring. ” says Sarah Mansfield,  Marketing Manager White Spirits

How to enter: Visit www.absolut.com/competition and download the template. Follow the instructions provided to create your entry, then upload the completed original artwork to the Competition Website.
The jury will review all eligible entries on the basis of the following equally-weighed judging criteria: creativity (25%), originality (25%), and expression of one or more of  Absolut’s visions of a better tomorrow reflecting the Absolut beliefs (50%).