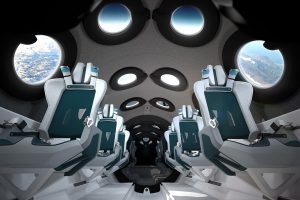 Virgin Galactic has revealed an inside look at the interior of its SpaceshipTwo model, also known as VSS Unity. The craft has been designed in collaboration with London-based agency Seymourpowell, and is intended to create “a level of intimacy required for personal discovery and transformation” to each of the six astronauts on the flight.

One stand-out feature of the cabin is seats, which feature a 3D knit designed by Under Armour and a pilot-controlled recline mechanism to help passengers manage G-forces. This reclining function also creates an “unrestricted float zone” so that astronaut’s can enjoy weightlessness in zero gravity.

Elsewhere, multi-color LED lights surround the “Halo” windows, while all lighting will switch off as the Earth comes into view, while 16 cabin cameras will create high-definition images to be used for Instagram posts and personal movies. Additionally, a large circular mirror sits at the rear of the aircraft, allowing passengers to view themselves as they experience weightlessness.

Speaking about the design, Richard Branson explained that, “This cabin has been designed specifically to allow thousands of people like you and me to achieve the dream of spaceflight safely – and that is incredibly exciting.” The Virgin Galactic CEO, Michael Colglazier, added that the cabin “will both facilitate and elevate a uniquely profound and transformational journey for the thousands who will fly.”

Take a look through the SpaceshipTwo cabin in the gallery above, while the design can also be experienced through an AR-enabled mobile app.