THE COMEDY CENTRAL ROAST OF AKA GOES BALLS-TO-THE-WALL AS PANELISTS MARK FISH, NINA HASTIE AND FRANCOIS VAN COKE KICK OFF THE NEXT ROUND 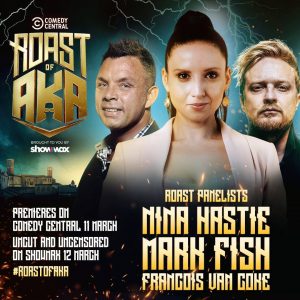 Johannesburg, 5 February 2019: The first three Roasters are ready to hit the battlefield! World football star Mark “Fiiiish” Fish, shooting from the hip Nina Hastie with her outspoken comedic talent and the baddest rock star Francois Van Coke will take on the notorious Rapster with an epic shoot-out in the highly anticipated Comedy Central Roast of AKA in partnership with Showmax, coming to The Teatroat Montecasino on 21 February 2019. 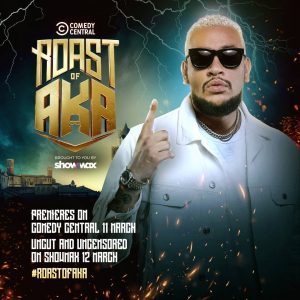 There ain’t nothing “fishy” about this Roast panelist – after making a real “Twit” of himself by accidentally announcing the passing of very much alive Sipho “Hotstix” Mabuse, Mark is nonetheless “The Big Fish”who knows better than anyone else how to defend without “taking the bait” and can attack with equal skill. A major part of our win in the 1996 African Cup of Nations, Mark quickly went from sardine to barracuda in the South African and International football scene, playing for several European clubs. Father of four and local heart-throb, he has a boot of solid steel and women just love his heavenly ball play. Roastee AKA and the panel had best not rub this “Fiiiish” up the wrong way!

Commenting on his panel role, Mark Fish said, “I am excited to be on the panel of the Comedy Central Roast of AKA, this may be the only time I can roast this him since he is king of roasting people on Twitter. Can’t wait to meet all the panelists and make people laugh out loud, I think I am a funny guy but this shall be revealed on the day.” 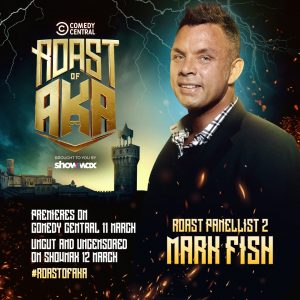 Teaming up with Mark for the burn of the year is the courageous Nina Hastie who has no filter when it comes to speaking her fiery mind. This pint-size pack of dynamite is no stranger when it comes to beating the odds. She knows how to talk “big” and is sure to show her grit with her knack for the attack.

“I’d love to see his mom Lynne Forbes on the panel, I doubt there’s anyone who knows him better. I would roast him on skipping leg day the most. His whole leg is ankle. Maybe that’s why he got a shoe sponsorship… Because having a whole leg as an ankle makes a shoe look very special.” said Nina. 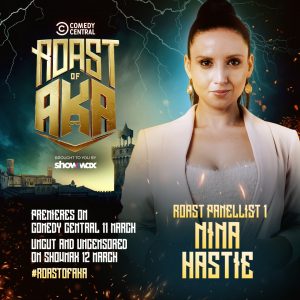 In a perfect yin-and-yang / Rock versus Rap face-off, the legendary bad boy (born BADenhorst) Francois van Coke will take centre stage and drop the MIC to try and face off AKA. Having already told the polisie what to do with their polisiekar this local rock idol will have no skaam when he gets into the ring with the boss of Rap. After breaking records with “Toe Vind Ek Jou” will Francois bring enough rock to the stage? Is he the bloke to get AKA to choke?

Van Coke added, “I am super amped to be part of AKA’s roast. I hope they fly me up to Jozi business class. I have only been on one business class flight in my life and it was because of AKA!” 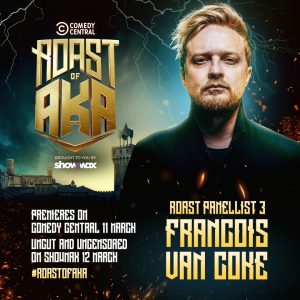 Hilarious, thought-provoking and without reservations, this Roast is the perfect grill for an audience who enjoys a spicy banter. Book your seats now to be front of house at the Comedy Central Roast of AKA in partnership with Showmax.

Filming of the Comedy Central Roast of AKA in partnership with Showmax will be open to the public and will take place on 21 February 2019 at The Teatro at Montecasino Teatro in Johannesburg. Tickets are sold out.