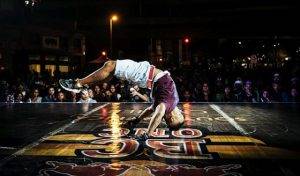 Johannesburg – Thursday, 11 April 2019: After a gruelling series of auditions held recently in Cape Town, Durban, Johannesburg and Port Elizabeth, 20 of the nation’s finest break dancers have been carefully hand-picked to compete in one of the greatest events of its kind on the South African calendar – the Red Bull BC One Final South Africa 2019 taking place at The Shred Skatepark in Cape Town on Saturday the 27th of April 2019.

The winner in the male category will be honoured by taking part in the biggest and most respected one-on-one B-boy competition in the world, the Red Bull BC One World Final, which will be held in magnificent Mumbai on the 9th of November 2019. The winner in the B-girl category will receive a trophy and be crowned the Queen of the South African Final. This is the first ever Red Bull B-girl Finalfor South Africa.

The judges of this renowned Final will be the lighter-than-air B-boy Menno (Netherlands), highly respected dancer and choreographer Vouks (South Africa) and Angelo. These legends of the B-boyculture will use their sharply tuned experience to select the next South African champ who will represent the country in the world finals. This discipline is one of the most technically complex forms of dance and the freedom to constantly create new moves makes the judging process extremely delicate. No pressure on the judges!

The day before the finals fans will be treated to a break dance workshop hosted by the rubber-boned Dutch All Star B-boy Menno. This is the chance of a lifetime giving the public the opportunity to engage face to face with the legend of break dance and to learn some of the basic moves. The workshop will be free and it is strongly recommended to arrive as early as possible!

Throughout the night Red Bull will present a line-up of prestigious DJs including Ryan the DJ and DJ realROZZANO breaking it down with the hip hop and deep rhythms needed by the B-boys and B-girls. They are ready to inspire these deeply focused gravity-defying athletes and to keep the breakers spinning. Other performances at the event include Niko10Long, Kixi, and Flōyu.

So get on down to The Shred Skatepark on the 27th of April for the biggest African face-off battle as local breakers defy the laws of physics in the fight to represent South Africa at the Red Bull BC One World Final!

For more information on the Red Bull BC One project, visit https://www.redbull.com/za-en/events/red-bull-bc-one-south-africa-final like and chat to us on Facebook at Red Bull, or join the conversation on Twitter and Instagram @RedBullZA using the hashtag #redbullbcone For images and videos go to https://www.redbullcontentpool.com/.