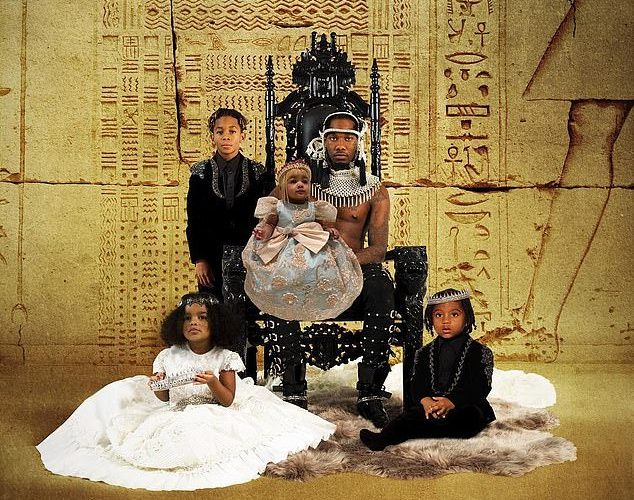 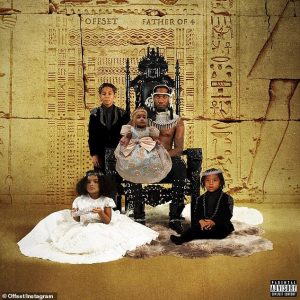 Migos rapper Offset enlisted his entire blended brood – daughter Kalea, 3; son Jordan, 9; daughter Kulture, 7 months; and son Kody, 3 – to pose by his throne for the cover of his debut album Father of 4, which drops at midnight.

The 27-year-old hip-hop star held his privileged princess Kulture with wife Cardi B on his lap for the Egyptian-inspired portrait where she wore a tiny blonde bob wig, tiara, and blue embroidered floral gown.

‘[Jordan is] only nine years old and he has a 65-yard range, four tackles. Then, at a basketball game he scored 13 out of the 25 points. Plus in baseball, home run.

Both Offset and his 26-year-old wife were ‘brought to tears’ upon first hearing the final 16-track ‘masterpiece,’ which centers on themes of fatherhood.

‘I cried to myself while I was doing this album because I was talking about my story and my kids,’ the Georgia native admitted.

‘When I did a song, I started getting memories of my grandma, my struggles, my partner that was killed, the thoughts I had while I was incarcerated, and my kids’ faces were there in my head. I love my kids, this is who I do it for.’

Offset desperately wishes he could set up his own absent, homeless father – whom he hasn’t spoken to in three years – with a million dollars and a house, but he refused out of pride.

‘It just started to make me upset. I’ve reached out and you’ve slapped my hand. You slapped my hand when it wasn’t even out,’ the Legacy rapper lamented.

‘You didn’t even come back to put anything in my hand. So now I feel like you don’t have any respect for me. You’re still running and you don’t have to.’

Offset added: ‘I’m not just all diamonds, pearls, and fancy big houses. I have flaws like everybody else. I’m a human being, too, and I want to open that up.’

The Red Room rapper also gave an update on his rocky marriage to the groundbreaking Grammy winner, whom he wed in September 2017 after only seven months of dating.

‘It’s been good,’ he said. ‘We’re being more open to each other, raising our baby and taking things slowly.’

Offset is next scheduled to join his Grammy-nominated trio onstage April 19 at the Dunkin’ Donuts Center Providence in Rhode Island alongside 21 Savage.

‘Bitch let me motherf***ing tell you how I can’t drink whole milk no more you know what I’m saying because I’m lactose intolerant b****,’ the Please Me hitmaker said Thursday to her 61.5M followers.

‘I drink whole milk my n**** and I have diarrhea for three days motherf***ing straight. I’m farting up a storm. It’s just not working out I feel like after you turn like 22 your body motherf***ing changing. So you know I drink Lactaid milk and motherf***ers look what they sent me!

‘You know I made it when they send me a motherf***ing bedazzled bowl…And you know what? This is the perfect bowl. Like, there’s not too much cereal, not too much milk balance well. B**** I’m poppin! I’m poppin, b****! Are any of y’all eating Honey Bunches and Oats like this? You hos ain’t eating your motherf***ing Fruit Loops!’

The Bronx-born Latina will next perform March 1 at Texas’ NRG Stadium in Houston.