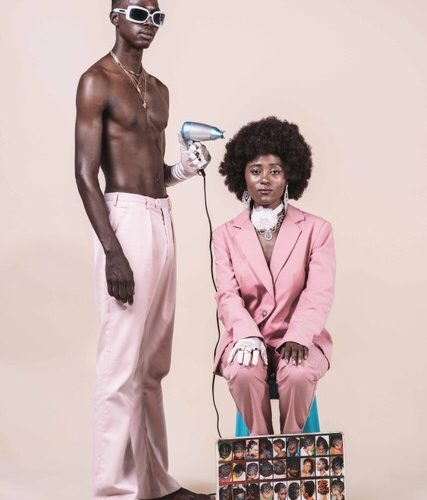 A photographic exhibition of the highly acclaimed body of work, a reflection on the African grooming and self-care experience.

Kgomotso Neto Tleane is a Dynamic South African photographer with the mouldings of rural life and trimmings of fast paced city living. Born and raised in Ga-Maja, the Johannesburg based photographer creates imagery that effortlessly reflects both the grime and glory of the city he inhabits.

Neto’s work ensured his acceptance into the 2018 New York Portfolio Review. This platform gave him the opportunity to get feedback from global industry giants on his work. He is currently freelancing, specialising in portraiture and editorials. His main focus is documenting everyday South Africans, which he showcases on his website and social media platforms

Turning Heads
Looking at a photograph is about listening and then looking. One has to listen to what the photograph wants to say before imposing anything on it. It is about how the ear catches the whispers and shouting that escape beyond the edges of the frame. It is about staring at what is there, what is not there, what could be there, what needs to be there. Turning Heads, Kgomotso Neto’s photography series inspired by black people and how they groom themselves on sidewalks, taxi ranks, malls, can only be viewed in this discipline.

“The idea came from how a lot of us groom ourselves in the streets, in the city and the township. We cut hair, do nails, buy wigs in streets. It’s always cheap and affordable to get yourself looking good in the streets to the point where your hairstyle turns heads, also I don’t know how my salons I’ve seen in the hood called “Turning Heads” That’s where one element of the shoot came from”. Neto explained.

After seeing the photographs that make up the Turning Heads series, returning to them every other day, for two months, they flood back in a collage, in the order that they had been played out, and then in their own order that they insist on. There is the photograph with the Afro comb sticking out, the one with hair hiding the face of the model, and then another, a close up. These and other photographs appear and reappear as they want to.

“I operate mostly on intuition”. He summarises his process. That quote should tell the story of a photographer who shoots with his heart rather than his finger. Everything else about his process is much more calculated. The framing is never an inch off, the lighting never a shade darker than it was meant to be, the clothes never fold in the wrong place, in a pose, the limbs, the body, fold exactly where they need to.

“The most important thing for me is to represent what I’m photographing in the most truthful and honest way possible. The photograph needs to be a true reflection of the situation at hand” Neto says.

on 28th November at 7pm, located at 7 Reserve Street, Braamfontein, Johannesburg. There are no reservations, guests will enter the Artivist space on a first come firs serve basis. Welcome drinks and snacks will be served.