This year’s Grammys were dominated by Lady Gaga, Kacey Musgraves and Childish Gambino, who won four awards but was absent from the ceremony.

Musgraves won the coveted album of the year and best country album for Golden Hour while Gaga got two prizes for Shallow, from the movie A Star Is Born won two.

Gambino’s powerful This is America won song of the year and record of the year.

There was also some British success with Dua Lipa winning best new artist.

Here are some other stand out moments from the awards.

Camila kicks things off in style 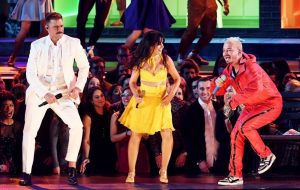 Cabello got the party started, performing Havana in a mock-up of her grandmother’s childhood home in a canary yellow two-piece dress. After an intricate piece of handkerchief choreography (yes, that’s a thing) Cabello ceded the stage to Martin, who performed his 2006 hit Pegate, followed by international sensation Balvin, with his smash Mi Gente.

Flanked by dozens of dancers and a full Cuban salsa band, the performance sizzled and sparkled – throwing down a gauntlet to every other artist on the bill.

If only the Grammys had scheduled it a year earlier, when Cabello and Balvin’s songs were current and award-eligible, it would have been a masterstroke.

Drake finally appears – and rejects the concept of awards shows 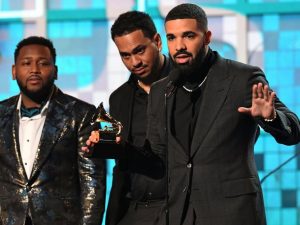 Drake notoriously boycotted previous Grammy ceremonies, withholding his records from consideration because he felt he was being unfairly sidelined in the rap categories.

This year, he declined to perform despite an invitation from producers, so it must have seemed like a coup when he agreed to turn up on stage to accept the best rap song (natch) award for God’s Plan.

“I want to take a moment to talk to the kids who want to do music,” he said. “I want to let you know that you play in an opinion-based sport. This a business where it’s sometimes up to a bunch of people who might not understand what a mixed-raced kid from Canada might have to say.

“The point is, you’ve already won if people are singing your songs word for word. If there’s people who have regular jobs who are coming out in the rain and the snow to see your show, you’ve already won.” (There may have been more but he was cut off mid-speech.)

I bet he puts the award on his mantelpiece anyway. 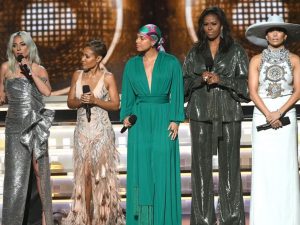 Following criticism that women were sidelined at the 2018 Grammys, this year’s ceremony established its feminist credentials right from the beginning.

Host Alicia Keys invited “my sisters” Lady Gaga, Jada Pinket-Smith and Jennifer Lopez onto the stage, alongside Michaelle Obama, who towered over them all.

They each told a personal story of how music changed their life, with J-Lo saying it “kept me moving from the Bronx to the big screen and the even bigger stages.”

When it came to her turn, the former First Lady was drowned out by applause, and had to restart her speech.

“From the Motown records I wore out on the South Side, to the Who Run The World songs that fuelled me through the last decade, music helps me tell my story,” she said.

“Music helps us share ourselves, our dignities and our sorrows. Music shows us all of it matters, every story with every voice, every note in every song.”

“Put your hands back in the air, don’t be lazy” 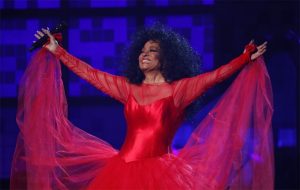 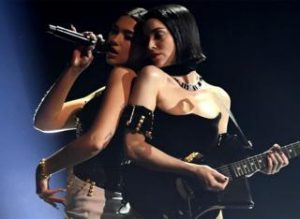 The pop stars’ erotically-charged, serpentine performance gave off more sparks than a toaster on the fritz.

St Vincent took to the stage first, showing off her inestimable guitar skills on a solo version of Masseduction. When Dua emerged from the shadows, they tarried on an excerpt of Aretha Franklin’s Respect, ending with the British star purring “sock it to me” and launching into One Kiss.

St Vincent scrawled fuzztone guitar over the formerly-pristine club hit, and it all got rather hot under the collar. Thought not too hot as to trouble the censors.

What’s the point of hosting an awards show if you can’t use it for ridiculous wish fulfilment.

Alicia Keys opened the second half of the Grammy ceremony sandwiched between two grand pianos, (one black, one white) playing Scott Joplin’s Maple Rag Leaf with one hand on each keyboard.

“I always wanted to play two pianos,” grinned the irritatingly dextrous star, before playing some of the songs that have inspired her through the years, including Nat King Cole’s Unforgettable, Roberta Flack’s Killing Me Softly, Ella Mai’s Boo’d Up, Lauryn Hill’s Doo Wop (That Thing) and Kings Of Leon’s Use Somebody.

“Who doesn’t wish they’d written this song?” she asked of each of song.

“And then finally, you write the song you wished you’d wrote,” she added, launching into Empire State Of Mind, her hit single with Jay-Z. 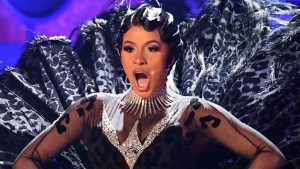 A former stripper and Instagram personality, Cardi B arrived at rapping late in the day – but she grasped the opportunity with both hands. After scoring major cross-over hits with Bodak Yellow, I Like It and the Bruno Mars collaboration Finesse, she made history on Sunday by becoming the first solo female to win best rap album.

As she says on the single Money – which she performed on Sunday – “I heard that Cardi went pop / That’s me bustin’ they bubble“. 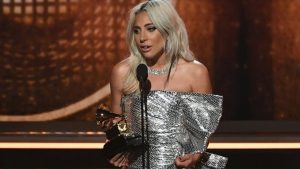 The first televised prize of the night went to Lady Gaga and Bradley Cooper, whose song Shallow (from A Star Is Born) won best pop duet.

Holding back tears, Gaga paid tribute to her co-star “who’s over at the Baftas in the UK” – where A Star Is Born also won best music.

“I’m so proud to be a part of a movie that addresses mental health issues,” the star added.

“A lot of artists deal with that and we gotta take care of each other. So if you see someone that’s hurting, don’t look away.” 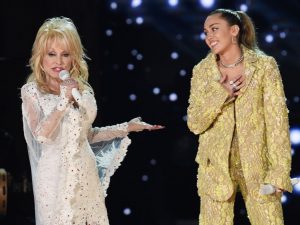 A who’s who of country music joined Dolly Parton, who’s been named the Grammys’ “person of the year”. Kacey Musgraves, Maren Morris, Little Big Town, Katy Perry and Parton’s goddaughter Miley Cyrus took the stage for a feel-good run-through of her biggest hits, including 9 to 5 and Jolene.

The highlight was a cover of Neil Young’s After the Gold Rush, with Parton, Cyrus and Morris harmonising flawlessly in a spine-tingling a capella breakdown.

But why did no-one consider calling the segment “Dolly’s mixtures”? 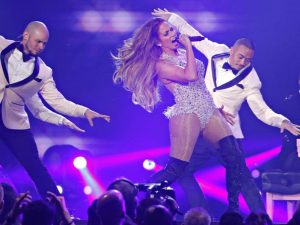 With a stunning acrobatic display, Jennifer Lopez paid tribute to the iconic US record label Motown with a medley of hits, including Dancing In The Street, Do You Love Me and Papa Was A Rolling Stone.

She was joined briefly by Smokey Robinson (for My Girl), Alicia Keys and Ne-Yo but this was entirely J-Lo’s show, dazzling in a diamante leotard and a feather-trimmed dress, as she pulled off a series of death-defying lifts and kicks.

“This is the music we listened to, me and my mom and my sisters,” she said, recalling how they used to dance around the house, pretending to be The Supremes.

“I grew up on Motown and the musicals. I think that’s why I’m the performer I am today.” 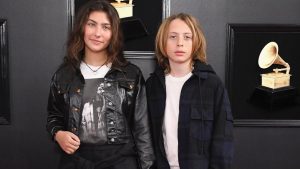 The late singer’s children, Toni and Christopher, took to the stage early on in the evening to accept the award for When Bad Does Good which won best rock performance.

Wearing a t-shirt with her famous father – who took his own life in 2017 at the age of 52 – Toni said: “I never thought we’d be standing here without my dad, he’d be proud and honoured, he was many things, a rock icon, the godfather of grunge”.

Christopher called his “one of the greatest poets of his time, the voice of a generation”.

Toni added; “His voice was his vision and his music was his peace, this is for you daddy and we love you so much.”