WHO WILL BE CROWNED THE “AFRICAN SOCIAL STAR OF 2020” AT THIS YEAR’S E! PEOPLE’S CHOICE AWARDS 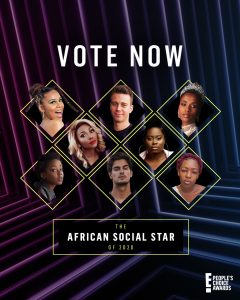 E! is engaging fans worldwide to vote in over 40 categories across TV, music, movies and pop culture. The voting window will begin 1 October and run through 23 October, on pca.eonline.com/af or Twitter.
For the second time in the history of the ceremony, the E! People’s Choice Awards has once again opened a category dedicated to Africa – African Social Star of 2020 – with eight contenders in the running. Last year, Bonang Mathebe scooped up the coveted title of African Influencer of 2019.

Speaking about their nominations:
Zozi Tunzi: “Wherever I go in the universe, it will always be my life’s mission to represent myself, my family, and my Africa in the beautiful light they all deserve to be. I have had the most incredible time doing that as the current Miss Universe and now this honor of being an E! People’s Choice Awards nominee still within my reign is mind blowing. Thank you so much and good luck to all the incredible nominees!”

Lydia Forson: “I have gone from watching E! News to being ‘THE NEWS’. If this isn’t what dreams are made of, I don’t know what is.”
Karl Kugelmann: “When I found out that I was nominated, I was at first quite surprised! I could hear my heart beating out of my chest and I then realised that I was actually very nervous but super excited! To be recognized and nominated, has been a massive morale-booster and it will encourage me to keep trying my absolute best! I am highly appreciative to be a part of this prestigious event and I want to extend my gratitude to those who played a part in recommending me. Thank you!”

Sho Madjozi: “This is amazing. What a huge nod from E!”
Dimma Umeh: “This nomination is such a welcome surprise and it proves to me without a doubt that with whatever you do, your dreams are valid!”

Wian van den Berg: “It is an absolute honour to be nominated! This shows the incredible support of my fans who got me to where I am today. This nomination symbolises every dream that has come true and I’m so grateful.”

Elsa Majimbo: “Being nominated reminds me that no dream is too big, no star is too far. Even when all odds seem to be against you, once you discover yourself and just be yourself you will experience the most beautiful parts of life.”

Thuso Mbedu: “I have never planned to be a star of any sorts. When I pursued acting it was because that is my purpose, the influence is a by-product and in this digital media age I aim to use my platforms for good, to create awareness for important causes and shine the light on things that could be overlooked. I am honoured to be considered for this award.”

The official voting window is from 1 October to 23 October. Fans can vote up to 25 times per day, per category, per method (voting website and Twitter). On 15 October, the votes will count as double, equalling up to a maximum of 50 votes per category, per voting method. For Twitter votes: posts must be public to count. Posts count as a vote if the category hashtag (#AfricanSocialStar) and a corresponding nominee hashtag are used together in the same post. For example:
Check it out! I voted for #NomineeName as #AfricanSocialStar at the E! People’s Choice Awards! #PCAs
The nominee hashtags are: #DimmaUmeh, #ElsaMajimbo, #KarlKugelmann, #LydiaForson, #ShoMadjozi, #ThusoMbedu, #Wian and #ZoziTunzi.

The E! People’s Choice Awards will be broadcast on Sunday 15 November, starting with Live From The Red Carpet at 02:00 CAT and the ceremony at 04:00 CAT. The ceremony will be repeated the following day on Monday 16 November at 21:30 CAT. Only on E! (DStv Channel 124).