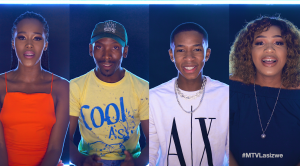 Johannesburg, 17 July 2020, MTV’s hit reality show “@Lasizwe Fake It till You Make It” makes a come back to our screens during one of the most critical times as the world grapples with the COVID-19 pandemic. The highly anticipated third season, which will feature Lasizwe joined by some familiar and new faces, will premiere on MTV (DStv channel 130) at 21:30 CAT on Monday,  03 August.

Viewers can expect to see Lasizwe as they have never seen him before. A newly released promo gives us a glimpse of what to expect when the season premieres on MTV. Lasizwe is back with a bang, opening up to Mac G on his ‘Podcast & Chill with Mac G’ alongside his childhood friend, Ofentse. He later introduces us to his other sister and newest cast member, Shantel Mcunu when he and his brother, Lungile attend a family function that reveals some interesting and complicated family dynamics.

“We started filming this season at the beginning of March when we started getting these pandemic scares. We quickly had to gather a lot of content to include in season 3. We are all going through a really difficult time but I am looking forward to showing viewers how I have been dealing with the pandemic as well as introduce them to new faces who have supported me during this time,” commented Lasiziwe.

This season, we are introduced to Shantel Mcunu, who joins as a new cast member on the show. Shantel has just recently given birth to a baby girl and there is secrecy around who the father is and what her own father knows about her surprise pregnancy. Khanyi Mbau appears as a guest star, as the siblings try to once again reflect on their “daddy” issues. The God Mother of Shantel’s child is actress Natasha Thahane, who also features in the show.

Monde Twala Senior Vice President and General Manager of ViacomCBS Networks Africa commented “In spite of the challenges presented by COVID-19, it is important for us to continue producing innovative content that mirrors the issues that society is currently faced with. MTV is a youth brand and our focus is to create content that is relevant, bold, and stimulating for our audiences. Season 3 of Lasizwe’s show reflects this and viewers can expect to be entertained.”