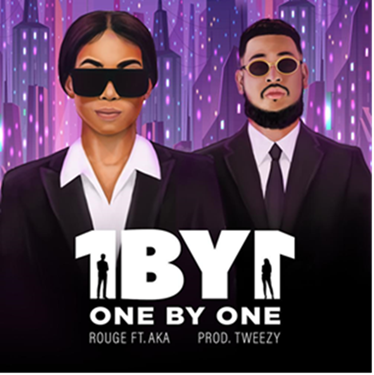 Set in the not so distant future, ‘The One by One’ music video by Rouge drops today featuring Supa Mega.  When fans found out that Rouge and AKA had teamed on in a single, no one ever expected it to be a love song that would see both artists carry their hearts on their sleeves and bare it all on this Tweezy produced anthem.

During the month of love this year we saw, the SAMA winning artist claim her #1 spot with the new single, which quickly became a favourite.

For anyone who has been questioning whether their friendship is genuine, this music video will help clarify that they are more than just hip hop acquaintances.  Even though it’s a known fact that AKAenjoys playing video games, what people are not aware of is that some of these games are usually against his recent favourite opponent, Rouge who still owes him a game of FIFA.

The One By One music video, carries a story line of a love affair that is monitored online by men in very black suits, which happen to be Rouge and AKA. In the video the two are both dressed in black, with one mission, to save the world through good music. In true Rouge form the music video carries scenes of the rapper and her dancers, recreate the feelings of being one by one with the one that you love.